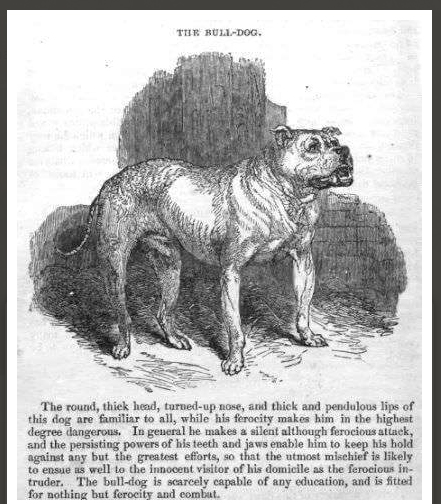 The Philo-Kuon Breeders of the 1800’s:
When debates were first heard at the turn of the 18th century on whether to make bull baiting illegal or not in England’s parliament, a group of visionary dog breeders began an effort to save the legendary symbol of British courage, the primordial English Bulldog. This group would eventually be called the Philo-Kuon breeders. Parliamentary debates continued for three and a half decades, during that time the British newspapers crucified the Bulldog, painting a caricature “monster dog”, image similar to the current media campaign against the Pit Bull.

The 19th century English newspapers were correct in only one area: the working Bulldog was too hard a dog to be a family pet without an out cross. Philo-Kuon breeders crossed Pug into Bulldogs to create a new breed that was to carry on the name and the valor of the original canine warrior but be more manageable. The Pug out cross was needed to tone down the extremely hard and aggressive personalities of the bull baiting dogs.

The original Bulldog resembled an American Staffordshire Terrier or a Performance AB and weighed about 50 pounds. Pug/Bulldog crosses often weighed only 20 pounds and resembled Boston Terriers with rose ears. The Pug/Bulls were tested in rat pits for gameness and functional structure. These weren’t show breeders trying to save the English Bulldog, they were people who use to bait bulls as a breed test.

The 20 pound miniature Bulldogs that survived the rat pits were bred to large 100% Bulldogs with short muzzles or small Mastiffs, both had to have mellow temperaments to be considered worthy breed candidates by Philo-Kuon breeders. The result was a 40 to 60 pound dog that resembled a Boxer.

In 1835 bull baiting was made illegal.

By the 1860’s the new breed had solidified and was gaining popularity as a home guardian. A breed standard was drawn up and dogs shows were held. A painting of Rosa and Crib, the foundation pair that most bloodlines sprang from, was incorporated into the English show standard. Rosa and Crib were the Adam and Eve of Philo-Kuon English Bulldogs The standard was written under the pen name Philo-Kuon, Latin for dog lover.

Philo-Kuon not only insisted that the newly created Bulldog Pug Bull breed must resemble Rosa and Crib, or in effect resemble Boxers, the dogs had to be courageous and resolute. The new version of the English Bulldog must be able to attack on command any threatening person or any wild animal and still be easy to control. The English breeders throughout the 19th century who followed the dictates of Philo-Kuon bred a courageous Boxer like Bulldog that was a family protector par excellence.

They tested their dogs extensively in various athletic activities such as throwing wooden planks into a churning ocean from 15 foot cliffs. The Philo-Kuon Bulldogs would plunge off the cliffs, into white caps and drag the planks to shore, barking joyfully for their masters to throw the plank out again.

The reason so many of these magnificent Philo-Kuon Bulldogs were shipped out of England has to do with a schism within the 19th century English Bulldog community. Towards the second half of the 19th century Boxer like Bulldogs stopped winning dog shows. A third type had been created through in breeding that looked nothing like a Boxer or a small Johnson AB. The new type was dubbed the sour mug.

It looked like nothing that had ever come before it. The sour mug had a muzzle so short it could not be measured. Its elbows were bowed out like a piano’s legs. Its chest was so wide it couldn’t move in a normal fashion. The Philo-Kuon breeders examined the third type, the sour mug, and declared it an abomination against nature and didn’t take the sour mug breeder’s threats seriously, threats to take over the English Bulldog national club and change the standard to favor the freakish sour mug.

Sour Mug breeders scorned the drawings of Rosa and Crib in the Philo-Kuon standard and the performance testing required to keep the English Bulldog athletic. They created a squatty non athletic toad like dog, the modern AKC English Bulldog and called for the athletic Philo-Kuon breeders to abandon the lithe Bulldog form. 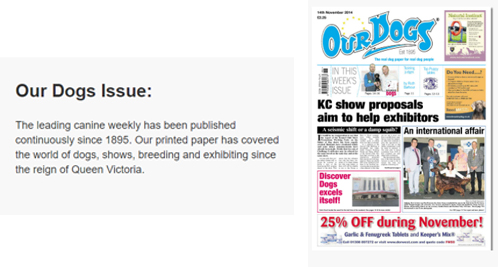 by
R. H. Voss
Text originally printed in 1933 in a British publication called “Our Dogs“.
Mr Voss was the #1 authority and historian of his day on Bulldogs. This same article was printed before in Stodghill’s ARF Cowdog Magazine, issue #114 in 1989. R.H. Voss suggest that the breed goes back to the war dogs of the ancient Britons. Briton was made a Roman province in the year 50 AD, when the British chieftain Caractacus was defeated by Emperor Claudius.At That time there were “pugnaces” or war dogs, in Briton. They were used in war, for the contests in the amphitheater and in the chase. These fighting dog of Briton were known as the Broad Mouthed Dogs of Briton. There is very little doubt that they were the original and remote ancestors of our Mastiff and Bulldog. They appealed to the Romans, who sent considerable numbers of them from Briton to Rome, to take part in the sports of the amphitheater, and it has even been said that the Romans appointed an officer to select British bulldog and export them to Rome. There is evidence that from Italy the breed of British war dogs was disseminated over the continent in the years 50/410.

In the years 1868 to 1873 the fresh importations of Spanish bulldogs by Mr. Marquart and Mr. Frank Adcock further increased to the numbers and probably also to the size of the large-sized Bulldogs, though only four or five kennels used these imported Bulldogs at stud. These importations greatly incensed the breeders who swore by the 50-pound dog as specifically bred for bull-baiting as being the original British Bulldog, which in actual fact he was not; and it was the outburst of horror at the dangers of the Spanish Invasion which caused the formation of the Bulldog club in 1875.It cannot be proved that any fresh crosses have been made since the 1870’s, but it is said that in the middle of the 90’s a small Mastiff bitch was on more than one occasions mated to a Bulldog in order to produce dogs of greater size and substance.  Whether this type is true or not, it is a significant fact that since that period we have had quite a number of dogs weighing over 70 lbs., some of them decided Mastiff type, although better rearing has doubtless played it’s part in increasing size and substance.The exhibition of the dog of today (1933*) is, therefore, the result of inter-crossing of the three distinct types which existed in 1859.  The large size dog having been increased in numbers by crossing with the imported Spanish Bulldogs of the 70’s and possibly further increased by the alleged Mastiff cross on a limited scale is the middle 90’s.

Students of the Bulldog who take the trouble to read history of his evolution will readily understand why even today, (1933*) there is no uniformity of type or size in Bulldogs, and why it is possible for two dogs to be of different type and size while at the same time, they are both good ones.  The differences in type and size spring from the different ingredients in their origin and these differences will never entirely disappear.  I hope that my reader will also agree with me that the British Bulldog, the Old English Mastiff, the Dogue de Bordeaux, and the Spanish Bulldog all sprang originally from the same British origin which is from the English Alaunt.  It is a theory I have held for years, but have never seen propounded…